An Introduction to the Rush Archives Blog

Photo: The Daniel Jones Memorial Building, shown here in 1914, was built in 1888 as part of Presbyterian Hospital. Located at Wood Street and Congress Parkway, it is the oldest building on the Rush campus.

The Rush Archives is the historical voice of Rush University Medical Center and its predecessor institutions. It is located in the basement level of the Triangle Office Building, and it holds a large collection of papers and artifacts from Rush’s past.

Rush Archivists bring Rush’s history to the public. There are Rush Archives exhibits in four campus locations. Currently, the exhibit, “Battling for the Honor of ‘Old Rush’: Sports at Rush Medical College, 1892-1904″ is on display in the Library of Rush University Medical Center, on the 5th floor of the Armour Academic Center.

In addition, an exhibit of materials drawn by Steven Economou, M.D., is on display just outside of Room 500 in the Professional Building. The hallway outside of the Archives in the basement level of the Triangle Office Building includes an exhibit of postcards from Rush’s past, a selection of materials from medical advertisements, and a hallway of photographs featuring scenes from Rush’s past.

Photo: Leaders of the 1900 Rush Medical College football team. Most material in "Battling for the Honor of Old Rush" was donated by Mary Harding, whose grandfather, John E. Schwendener, is on the left.

The Archives has digitized a portion of its collection. If you would like to see a selection of Rush documents for yourself, you can explore the Archives’ growing digital library on the Rush Archives website.

The Archives is open to researchers, by appointment, Monday through Friday, 9 a.m. to 3 p.m. Archivists Heather Stecklein and Nathalie Wheaton can answer questions about events and individuals associated with this institution since Rush Medical College was chartered in 1837. You can contact the Archives at Rush_Archives@rush.edu or at (312) 942-6358.

Heather Stecklein is an archivist with Rush University Medical Center.

Summer 2022 Update: We will have limited appointment availabilities this summer but will try our best to accommodate researchers. 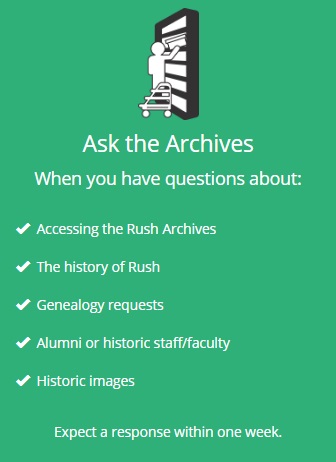 Visiting the Rush Archives: In-person visits from researchers must be approved by the archivist ahead of time.