From the Rush Archives: World Polio Day (Oct. 24) and Advancements in Care of Polio Patients at Presbyterian Hospital, 1938

October 24 marks World Polio Day. When establishing this day to raise awareness of polio and eradication efforts, Rotary International chose October 24 in honor of the birthday of Jonas Salk, who developed one of the first successful polio vaccines in 1955. Regular outbreaks of polio in the United States were not uncommon in the decades preceding the first vaccines.

Polio symptoms can range from pain and stiffness to paralysis. In the past, paralysis of the muscles needed for breathing could lead to death without the assistance of what became known as the iron lung.

The first documented use of the (Drinker and Shaw) “Iron Lung” was on October 12, 1928 in Boston, MA. This large, cumbersome equipment was also costly to purchase, operate, and maintain. Although some polio patients remained in iron lungs for decades, most utilized them for about two weeks as their bodies recovered. 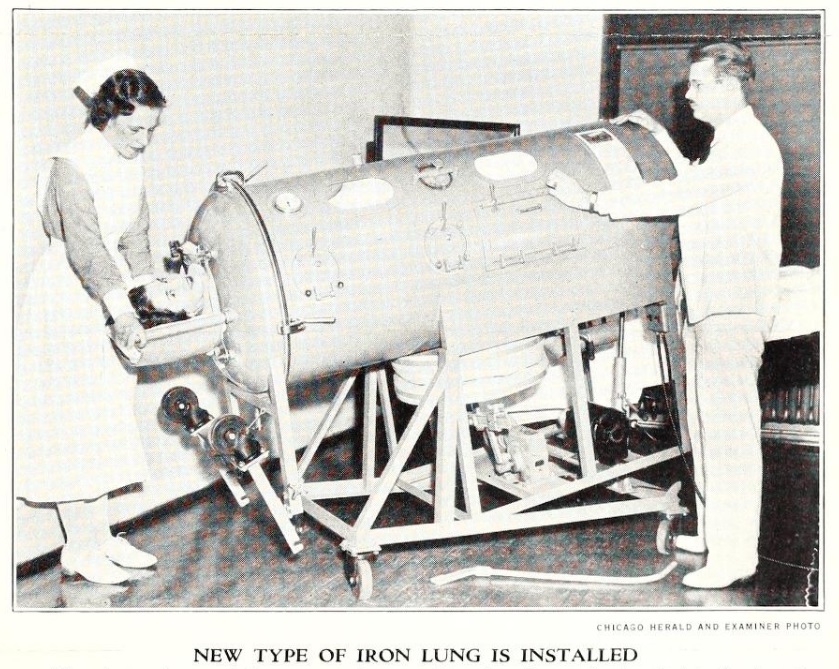 In 1938, Rush's historic Presbyterian Hospital installed a new type of “Iron Lung.” Compared with older models, this newer installation allowed for manipulation of the patient’s body while they were lying in the machine, allowing them to change positions.

In the February 1938 issue of the hospital's The Bulletin newsletter, attention was brought to the case of Mary Dee McTaggart, a 17-year-old girl with infantile paralysis. McTaggart, following continuous use of the “Iron Lung,” demonstrated significant improvement in her ability to breathe independently. In February of 1938, it was reported that McTaggart only used the “Iron Lung” when sleeping – doctors noted that she slept more restfully, which improved her ability to participate in her strenuous physical therapy program.

As for McTaggart, she recovered from the disease and went on to earn her bachelor's of science degree in education from Northwestern University in 1943.

In addition to helping patients with infantile paralysis, the “Iron Lung” was also used for patients with respiratory failure due to monoxide poisoning, electric shock, post-anesthetic collapse, and spinal column injuries, among others.

CAPTION: "The above picture of the new respirator or "iron lung" recently installed in Presbyterian Hospital shows how it may be tilted to lower or raise the head of the patient. The patient lies comfortably with only her head protruding. A sponge-like rubber collar fits around the neck. The part on which the head and body of patient rests may be rotated to one side or the other, enabling the patient to lie on either side. In the old type of respirator the patient had to lie on the back continuously. The bellows underneath the cylinder is operated by electricity so that air is rhythmically pumped into and out of the cylinder. If power should fail at any time, the lever shown on the floor in front of the respirator can be attached to pump the bellows by hand. The nurse is Miss Dixie Schmidt. Mary Dee McTaggart is the patient and the intern is Dr. Joe E. Brown." From The Bulletin of Presbyterian Hospital, February 1938. [1] [Image reprinted from Chicago Herald and Examiner.]

For more information about World Polio Day and Rotary International's eradication efforts: [link] . Explore a timeline of major events in the history of the fight against polio and the efforts of Rotary International and the World Health Organization to eradicate the disease, "Rotary and the Fight Against Polio": www.endpolio.org/rotary-and-the-fight-against-polio