From the Rush Archives: Presbyterian Hospital and the Influenza Pandemic of 1918

During this time of the COVID-19 pandemic, naturally there has been a lot of interest lately in the devastating 1918 influenza pandemic.

One simple way to learn about how the influenza pandemic of 1918 affected Rush’s schools and hospitals at the time is to explore our digital collections of annual reports, school catalogs, and newsletters.

You can find historic overviews, brief timelines, collection guides, and digitized records for each of those institutions on the Rush Archives website here, “Institutional Records”: https://rushu.libguides.com/c.php?g=217470&p=1436727

The 1918 Annual Report of Presbyterian Hospital* provides an overview of that year, including information about the devastating pandemic: https://archive.org/details/annualreportofpr36pres

Even in our time of advances in technology and medicine, some methods of containing an epidemic are tried and true. During the 1918 influenza pandemic, Presbyterian Hospital quickly closed the hospital to general visiting and postponed any cases, including surgeries, which could wait. The State Board of Health ordered a quarantine of all hospitals a week later, and Presbyterian Hospital staff felt they were at an advantage having already put their plan into effect. 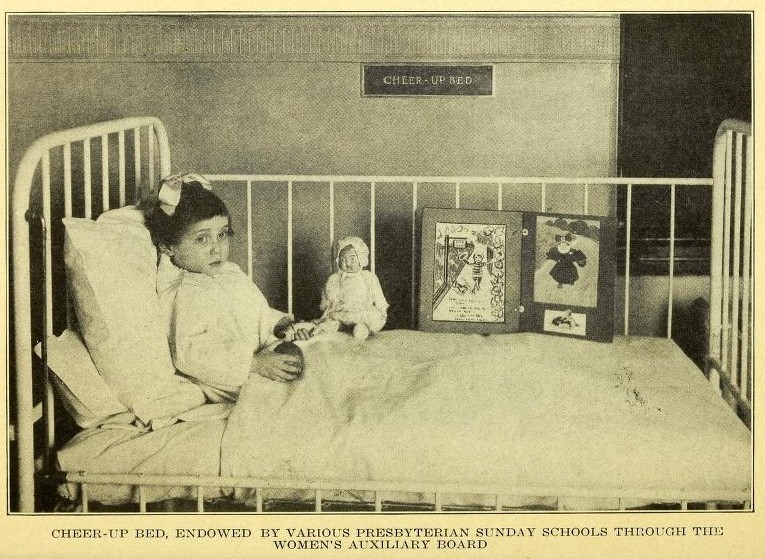 The disease affected the manpower of the hospital as staff fell ill from the disease, including nurses, students of the Presbyterian Hospital School of Nursing, and kitchen and laundry staff. During this time period, student nurses provided much of the day-to-day work on the hospital floor. The new class of students had only just arrived, and it was feared that many of the new students might have brought the disease with them from other cities. Although many nurses and students fell ill to influenza, all recovered except for a student nurse in the senior class, Gladys Foster.

This was an era when payments from patients in private rooms also covered the care of patients in the public wards of the hospital. The loss of income from private patients, general practice and non-urgent surgeries was a major blow to the hospital’s finances, as the hospital was devoted mostly to the care of influenza patients from October to November and again in December during what we might now call a “second spike.”

The administration of the hospital was grateful for a generous bequest from longtime president of Chicago, Burlington & Quincy Railroad, George B. Harris, who left half of his fortune, estimated at $400,000, to Presbyterian Hospital. “The disposition of his property in such way as to be of the most benefit to the community in which he had acquired it, was a subject to which he gave much attention during his later life. He acquainted himself fully with the work of the hospital, its hopes and aims, and decided it was worthy of his assistance.”

In this time of uncertainty and loss due to COVID-19, Rush University Medical Center and the Rush University System for Health are grateful for our fellow community members who, like Mr. Harris almost a hundred years ago, have been able to lend support to these institutions to continue their work in patient care, education, research, and community partnership.

For more details on Presbyterian Hospital and the influenza epidemic, explore the whole Annual Report. This document also has information about how the World War affected the hospital, the work of the Social Service Department, and the importance of “Occupation Therapy” during this time.

**The spelling “employes” as opposed to “employees” was a common spelling for many years, as was “internes” for “interns.”

From the Report of the President, Albert M. Day [statements bolded by the archivist]:

An important feature of the year was the influenza epidemic. As soon as it became evident that it was spreading through the city positive action was taken. General visiting was at once stopped. The hospital was quite full of patients at the time, and daily admittances increasing. All cases that could be postponed, such as certain surgical, were encouraged to wait. The contagious ward was put in order and the number of beds increased to the fullest extent. The seventh floor of the Jones building is well adapted to the care of such cases, and arrangements were made to remove the general patients from this floor when required. No new patients were admitted there. By order of the State Board of Health all hospitals were quarantined one week later. Our action previously taken proved an important advantage. Our new class of pupil nurses, numbering sixty-four, had just arrived. Apparently some of them brought the epidemic with them, and very soon it was in evidence. At its height six nurses a day were taken down; in all eighty-three became sick. As soon as the disease manifested itself they were removed from the home to the hospital and cared for. We were exceedingly fortunate, as only one failed to recover. Miss Gladys Foster, a senior pupil of much promise, could not rally. Meanwhile all ordinary cases were taken from the seventh floor and placed in another part of the hospital, and that entire space given up to the epidemic. No surgical cases, except emergencies, were received, and as far as possible we settled down to a fight against the epidemic. As the nurses recovered and began to return to work, the employes* were taken down. A total of thirty-three were affected, and this seriously crippled our kitchen and laundry force, and made operation difficult. Fortunately we were able to get through and to do our part in receiving outside influenza cases. Only two cases developed among the entire number of patients who were in the house when the epidemic commenced, and one of these went outside contrary to instructions, and contracted the disease in that way. All the cases that were sent in to us were desperate when received, generally with serious pneumonia, and for a few days the mortality was large. Later we were fortunate in saving practically all that came to us.

All hospitals were quarantined by the Board of Health from October 4 to November 10. Strictly following instructions, only emergency operations were performed during that period, and all general cases were discouraged from coming to us. The effect on our Private Pavilion was most marked, and the patients there were gradually reduced to a small number. This made a serious inroad in our finances, as the Private Pavilion patients are the only ones that pay the full cost of the service. The small profit which is made on those patients goes to repair the loss on the general wards and defray the cost of our charity work. The result showed a loss for October nearly double that of any month since the hospital opened, and November was but slightly better. Our obligation to the staff, to superintendent and nurses, and to all employes who loyally co-operated together under very trying conditions, is great. Without disparagement to any when all have given such devoted service, special mention should be made of those internes and nurses who labored so strenuously during the epidemic without thought of themselves, and contributed so greatly to the successful issue of the struggle. Our employes stood by us splendidly. Acknowledgment of our sincere appreciation is heartily given to all.

There was a recurrence of the disease throughout the city in December. This again compelled turning over a considerable space to influenza patients only. Our previous experience enabled us to manage it with less difficulty, but the effect on our finances was marked, and our regular work was curtailed.

For its effect on the future of the hospital, the most important event of the year was the wonderful bequest of the late Mr. George B. Harris, who died June 10. The bulk of his fortune was bequeathed equally to the hospital and to the Art Institute. The inheritance taxes are large, but it is estimated that the amount to be received by each residuary legatee will amount to over $400,000. Mr. Harris was a distinguished railroad man, serving for many years as president of the Chicago, Burlington & Quincy Railroad, and later as chairman of its board. A quiet and somewhat reserved man, not inclined to look for any prominence in the world outside of his work, to which he devoted his energies with great singleness of purpose, he yet was widely known and had a large circle of friends. The disposition of his property in such way as to be of the most benefit to the community in which he had acquired it, was a subject to which he gave much attention during his later life. He acquainted himself fully with the work of the hospital, its hopes and aims, and decided it was worthy of his assistance. Our desire and effort will be to administer his most generous gift in such a way as will best carry out the wishes of the donor in benefiting this community. It will be a splendid memorial to Mr. Harris and will greatly increase our capacity for usefulness. The money will not reach us until October next.