Today is National Radio Day, a day to recognize radio’s value. Radios were first used commercially in the early 1920s, and Rush’s predecessor schools and hospitals were eager to attain the new gadget.

Beginning in the 1920s, radios played an important role at our schools and hospitals. They brought cheer, comfort, and information to the patient wards at St. Luke’s and Presbyterian Hospitals. Their nursing school students at the time lived together in Nurses’ Homes near the hospitals, and gathered together in their lounges to listen to music or radio programs. These radio programs produced radio stars, who were known to visit hospital patients to boost morale. A new radio for the hospitals or nursing schools was a popular gift from the hospital Woman’s Boards or local philanthropists. 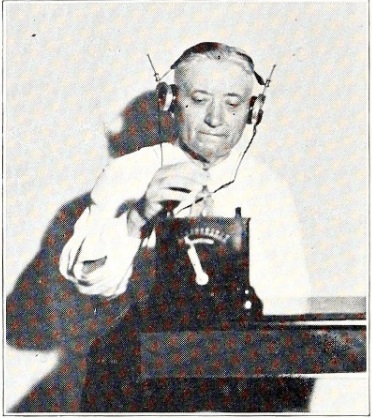 Presbyterian Hospital, which was the teaching hospital of Rush Medical College, here on Rush’s current campus, received its first radio in 1921. According to a 1939 article in the Bulletin of Presbyterian Hospital newsletter [1], the first radio at Presbyterian was a Federal Crystal set, which was bought in 1921 by Ben Camp, switchboard operator. The first station heard was the Zenith Radio Corporation in the Drake Hotel, the only radio station in Chicago at the time.

After using it for a few months, Mr. Camp sold it to Sam Knudsen, hospital purchasing agent, who in turn sold it to Mr. Thompson in 1923. Mr. Thompson used it until 1932, when he bought an up-to-date radio receiving set. The old crystal set still works but as always requires much concentrated effort to keep it “tuned in.” The last important broadcast heard by Mr. Thompson over this set was the 1932 Democratic convention [2] in the Chicago stadium [3].

[1] From the Bulletin of Presbyterian Hospital of the City of Chicago, July-August 1939: https://archive.org/details/bulletin31pres/page/24/mode/2up

[2] The 1932 Democratic National Convention nominated Franklin D. Roosevelt, governor of New York, to the presidency of the United States that year. Although he eventually became a popular president, serving from 1933 until his death in 1945, his nomination at the convention was far from certain at the time.

[3] The Chicago Stadium, 1929-1994, was the predecessor of today’s United Center and was located just north of the Rush campus on the West Side of Chicago.