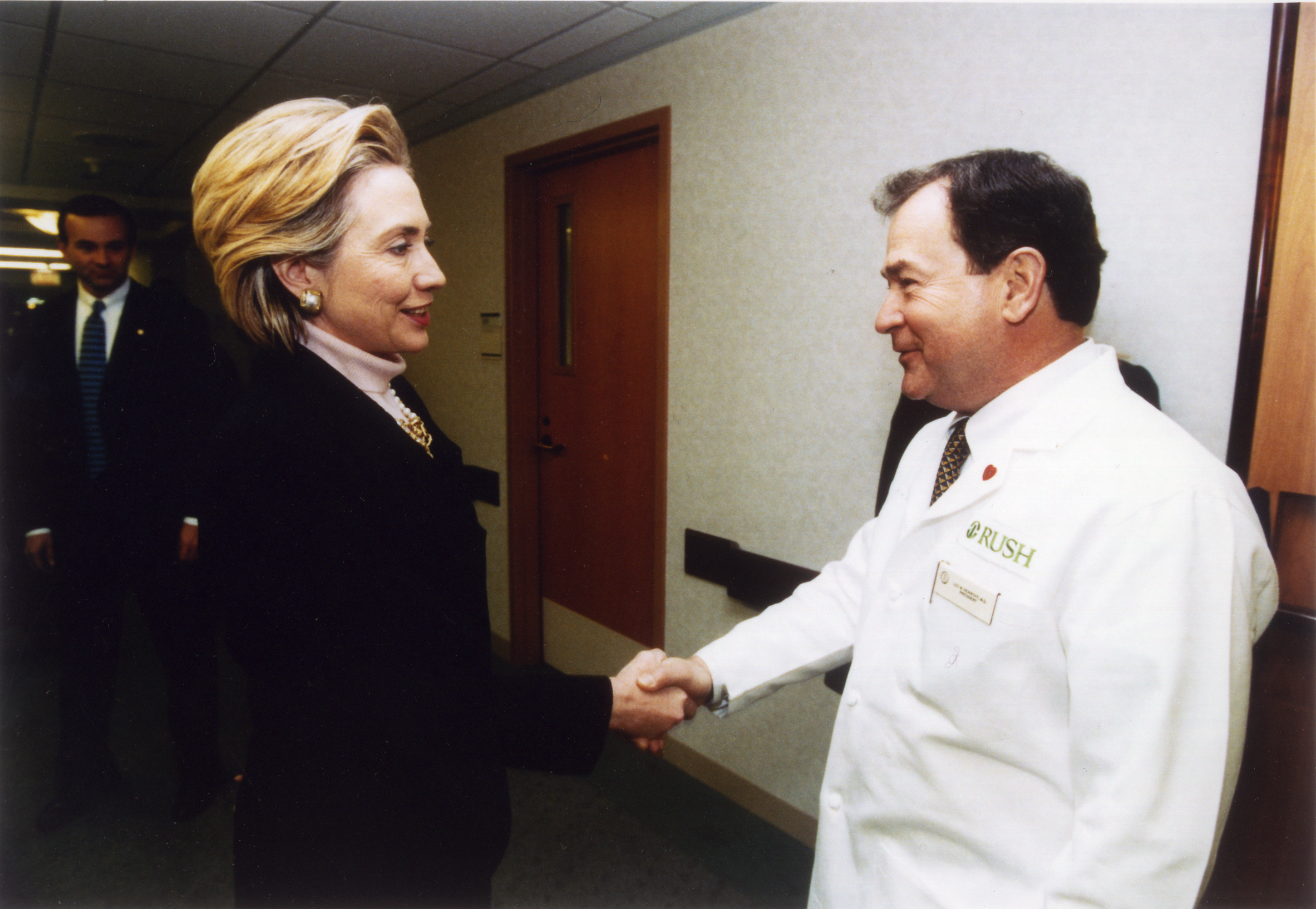 Morrell and Rush neurosurgeon Walter Whisler, MD, PhD, developed a surgery called multiple subpial transection, which offered hope to certain epilepsy patients who couldn't be helped by traditional medical or surgical means. Patients who have benefited from this surgery include many children with a form of epilepsy called Landau-KIeffner syndrome, which affects the area of the brain responsible for speech and language comprehension.

Mrs. Clinton toured the Rush Epilepsy Center with its director, Michael Smith, MD, and Rush President and CEO Leo M. Henikoff, MD [PHOTO-LEFT]. The Epilepsy Center is one of the nation’s most comprehensive facilities for diagnosis, monitoring and treatment of epilepsy.

Epilepsy is a central nervous system disorder characterized by seizures that disrupt communication between brain cells. It affects more than 2.3 million Americans [in 1999. According to the CDC, as of 2015, 3.1 million Americans have epilepsy.] People can develop the disease at any age. 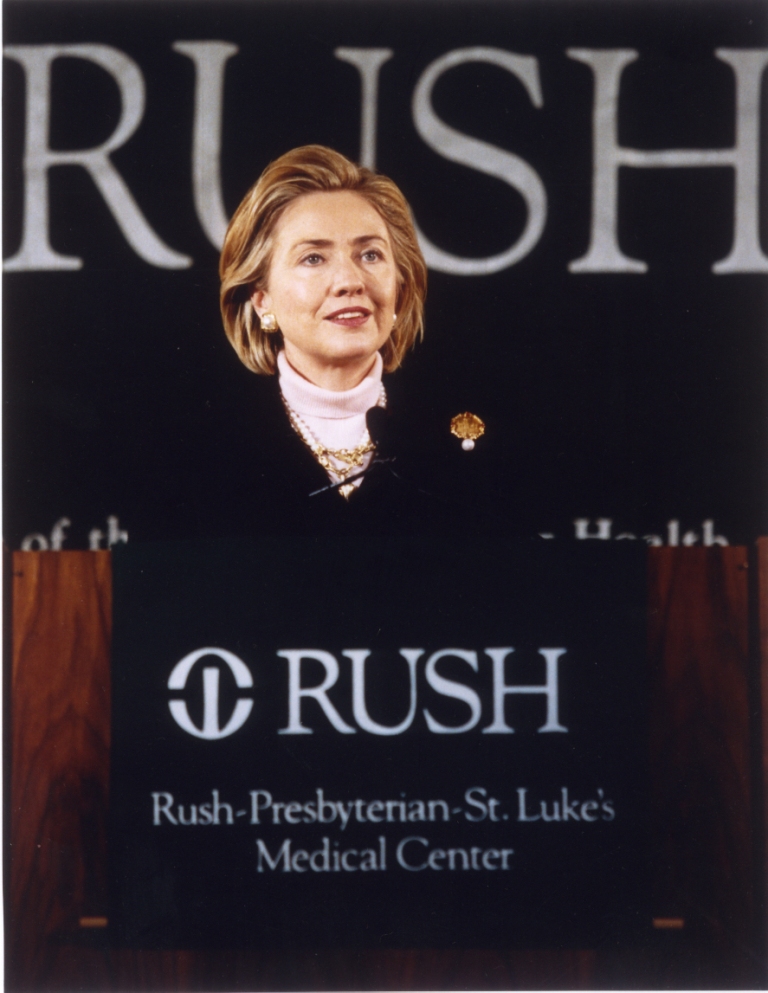 To help improve available treatments, Mrs. Clinton announced that the federal government would be increasing epilepsy research funding. She announced it would grow from $54 million in 1995, to a projected $76 million in 1999. In the next year, the National Institute of Health planned to convene 150 experts for the first-ever White House initiated conference on epilepsy.

Mrs. Clinton also emphasized the need for educating the public about epilepsy:

“While most people with epilepsy today can thankfully control their seizures, even they must live with something they cannot control: the cruel social stigma and stereotyping that comes with widespread ignorance of this disorder,” she said. "That can damage the spirit as much as the seizures themselves damage the brain. Clearly, we have to do a better job of educating ourselves and of increasing awareness among all Americans."

FROM the April/May issue of Rush's NewsRounds newsletter, “A little understanding goes a long way: Educating the public about epilepsy” [2]:

In 1999, the Epilepsy Education and Outreach Initiative was started at Rush-Presbyterian-St. Luke’s Medical Center*. This initiative was not begun by a health specialist at Rush, but by the father of a Rush patient.

Philip Gattone, Jr., was a second grader with epilepsy who experienced seizures in school, making it difficult to keep up with his peers. When his parents found out that he was becoming isolated at school, they decided to visit his class and help his classmates better understand what he was experiencing. 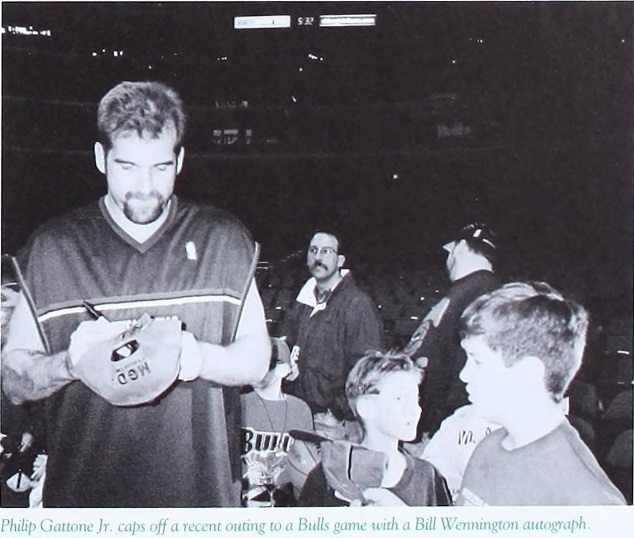 CAPTION: Philip Gattone, Jr., gets an autograph at a Chicago Bulls game from player Bill Wennington. From NewsRounds, April/May 1999.

Following this experience, Philip Gattone, Sr., created the Center for Epilepsy Education. Philip Jr. later underwent two surgeries at Rush which stopped his seizures, and Mr. Gattone was invited by Michael Smith, MD, the director of the Rush Epilepsy Center, to run the center’s epilepsy education and outreach initiative.

Philip Gattone, Sr., served as director of education in Rush's department of neurology for a few years before moving on to administrative roles in the Epilepsy Foundation, eventually serving as its President and CEO.

The Epilepsy Center at Rush continues to provide expert, comprehensive services. As a level 4 National Association of Epilepsy Centers (NAEC) epilepsy center, Rush University Medical Center meets the highest standards for seizure diagnosis and care. Rush specializes in treating seizures that do not respond to medication (or, intractable epilepsy).

To learn more about the Epilepsy Center, visit their webpage: www.rush.edu/services/epilepsy-center