This May, we observe American Stroke Awareness Month and work to bring awareness to the public about the signs of and risk factors for stroke.

Rush University Medical Center has been a distinguished stroke center since 2008, but we have been striving to improve treatments for pre-stroke patients for much longer.

An example of the teamwork involved in investigating causes and treatments of stroke can be found in a television interview on WBBM/TV Channel 2, March 11, 1979. In this interview, Hushang Javid, MD, cardiovascular and thoracic surgery, described his team’s success in surgically implanting synthetic tubes to bypass clogged arteries and reduce the risk of stroke for patients who had previously experienced transient ischemic attacks. Michael Huckman, MD, Director, Section of Neuroradiology, discussed the importance of CAT scanners in safely and effectively identifying the presence of bleeding or swelling in the brain. Maynard Cohen, MD, PhD, Jeanne Schweppe Armour Chairman, Department of Neurological Sciences, expressed optimism for the use of an experimental drug called pentoxifylline to increase blood flow to the brain. And Raymond Clasen, MD, pathology, highlighted the importance of obtaining autopsies to verify the images obtained with the improved CAT scanner technologies.

You can read a transcript of this television interview in Rush’s 1979 Report of Stewardship* (Annual Report):

Click on the image to view the entire piece from 1979: 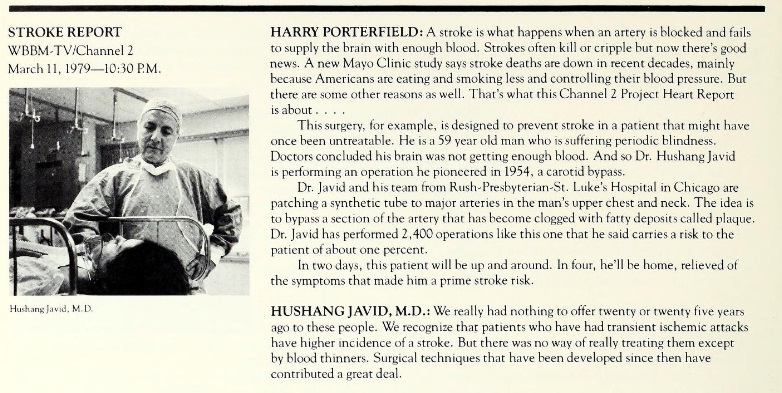