In the late 1970s, nurses across the country helped push the medical community toward awareness of domestic violence and related health, safety, and social concerns of victims and families. For many Americans, this awareness was raised in 1985, when U. S. Surgeon General Everett Koop called for the first-ever task force centered on domestic violence and related issues. 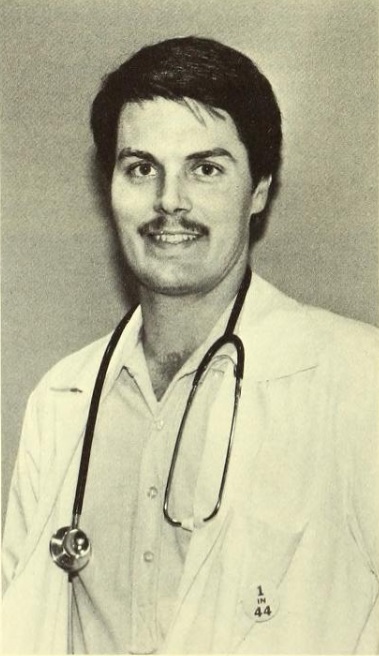 In 1980, Rush University College of Nursing student Daniel Sheridan helped start a larger conversation at Rush, when he arranged a noon forum for Rush students and staff interested in viewing a film on domestic violence. Attendance and interest ran high, so subsequent forums led Sheridan to co-found the Rush Coalition Against Spouse Abuse (RCASA.)

The May-June 1982 issue of Rush’s NewsRounds newsletter spotlighted Sheridan [at left], who earned his Bachelor of Science degree with a Major in Nursing that year. (Sheridan would later go on to earn his MS from the College of Nursing in 1985.)

"…Originally made up mostly of nursing students, R-CASA now boasts a membership primarily of Medical Center staff. Through Sheridan’s efforts and those of other volunteers, R-CASA has involved social workers, psychiatric nursing staff, legal affairs staff, and others at the Medical Center in its work to aid battered patients…"

"…The group produced a wallet-size referral card of agencies the battered patient can turn to upon leaving the Medical Center. 'We had 500 cards made up and distributed them to various Medical Center personnel. They were scooped up and gone in two weeks!'…"

"…'Because health care staff are usually the first professionals to be in a position to help battered patients, it’s important that they’re adequately trained to deal with the situation. What we do or don’t do may affect how the battered woman seeks future intervention.'…"

In 1981, Rush became a member of the Chicago Metropolitan Battered Women’s Network. Sheridan served as the chairman of the Network’s health committee for several years. 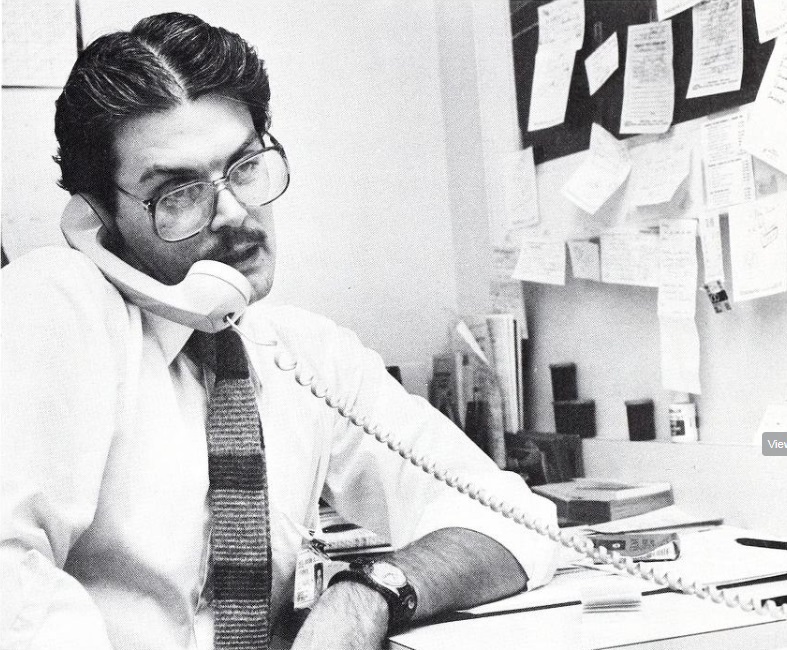 In 1986, Rush Departments of Medical Nursing, Social Services and Emergency Services responded to the serious health problems and issues affecting victims of domestic violence by forming the Rush Family Violence Program. At the time, it was the only such hospital-based program in Illinois designed to intervene, assess, educate and refer abuse victims to appropriate support and other services specifically set up to help them survive and cope. Sheridan, MS, RN, served as its first director.

A 1992 piece in Rush’s The Magazine, “Surviving Domestic Violence” [3] focused on advancements in the medical community regarding the issue of domestic violence since the 1970s and 1980s. The article also discusses the importance of intervention, removing the stigma of domestic violence, ending victim blaming, and, also, the importance of improving the standing of victims within the legal system.

In the 1992 article, Wendy Taylor, MS, RN, [at right] coordinator of the Rush Family Violence Program, stated the following: 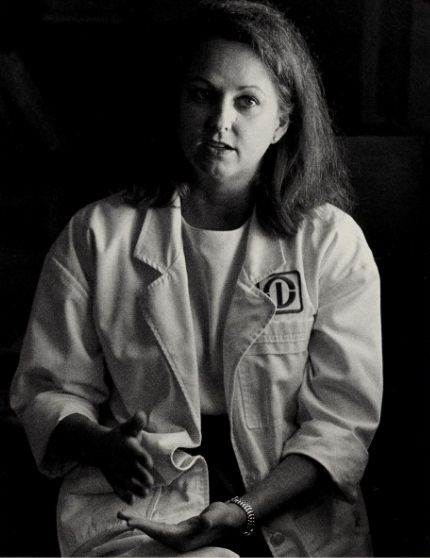 “Through education, we can empower women who have been abused and help them take control of their lives. We made them aware of their options and reassure them that they do not deserve to be verbally, physically or emotionally abused by anyone. We inform them that physical violence is a crime and should be treated as such. We let them know they are not alone and that they don’t have to face this situation by themselves. We are here to help them.”

Sheridan went on to earn his PhD from the Oregon Health Sciences University School of Nursing. Since then, Sheridan has served many roles across the country as a pioneer and leader in the field of forensic nursing.

Learn more about Sheridan's career and the development of forensic nursing:

"Connecting Medicine and Violence: An Early Look at Forensic Nursing" (How vanguards stepped in to fill a void for battered women, and ultimately, launched “forensic nursing” practice) from Vital Record, news from Texas A&M Health, February 23, 2016. [4] 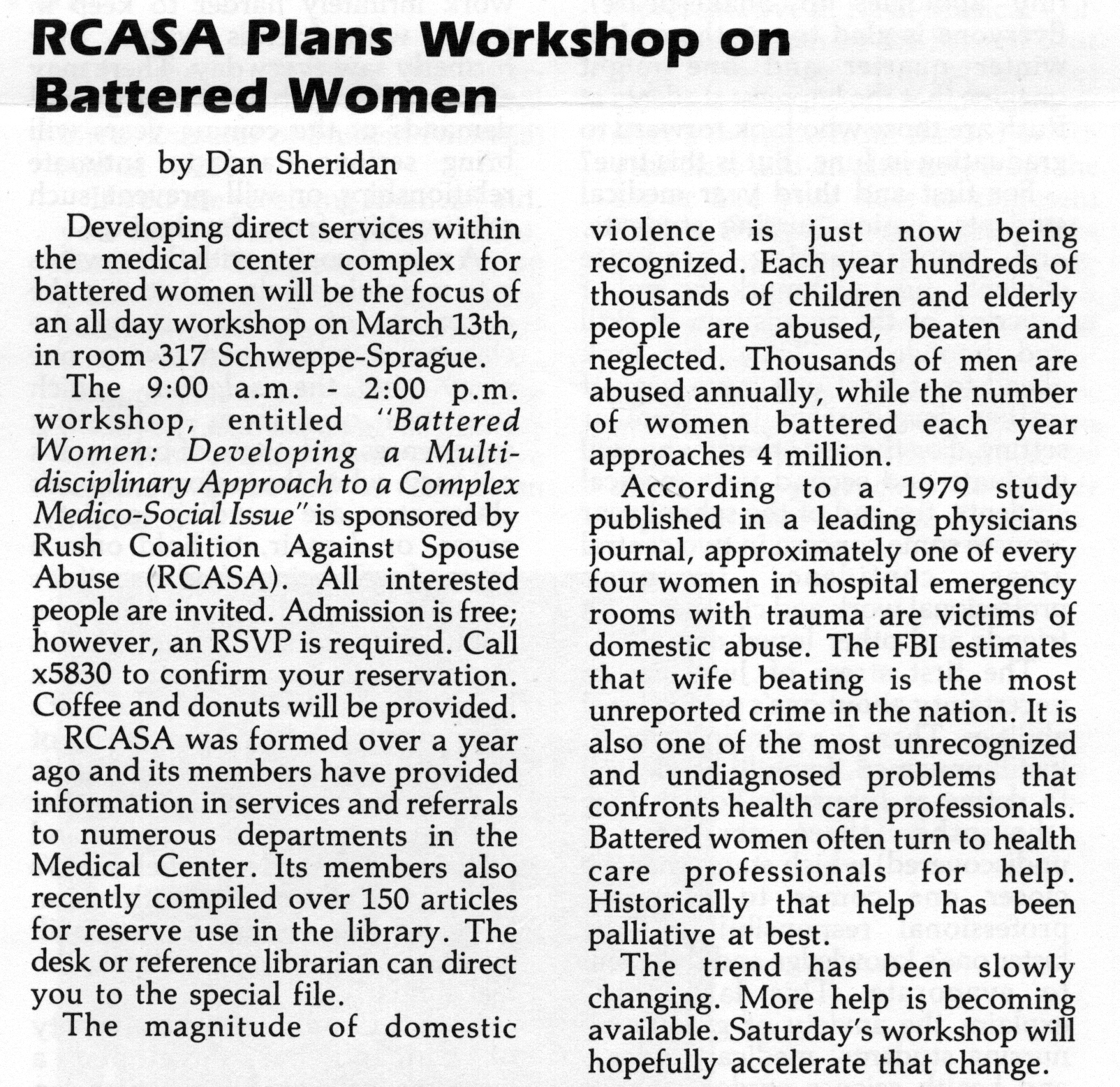 The Rush Archives was honored to loan items from our collections for a 2015 exhibit at the National Institutes of Health's National Library of Medicine, Confronting Violence: Improving Women’s Lives. [5] A section of the exhibit, "Nurses Take a Stand," included items related to Sheridan’s work and the Rush Coalition Against Spouse Abuse. Included in this exhibit was an article from Rush University's student newsletter, Rush Reporter, March 1982, [at left] about the founding of RCASA and an all-day workshop focused on domestic violence.

Today, Rush’s Department of Social Work and Community Health offers a wide range of services through its team of social workers and psychotherapists. [6]

Learn more about the Domestic Violence Awareness Project through their website: www.dvawareness.org