After decades of scientific research into possible causes and treatments for diabetes, a diabetic patient received the first insulin injection in January 1922. Over the next ten years, the use of this life-saving treatment to control diabetes spread rapidly.

Before the introduction of insulin, there was little to temper the disease, although some physicians saw improvements for some patients by utilizing strict experimental diets. These diets were often a guessing game as physicians and researchers tried to adjust restrictions and eliminations for individual patients. 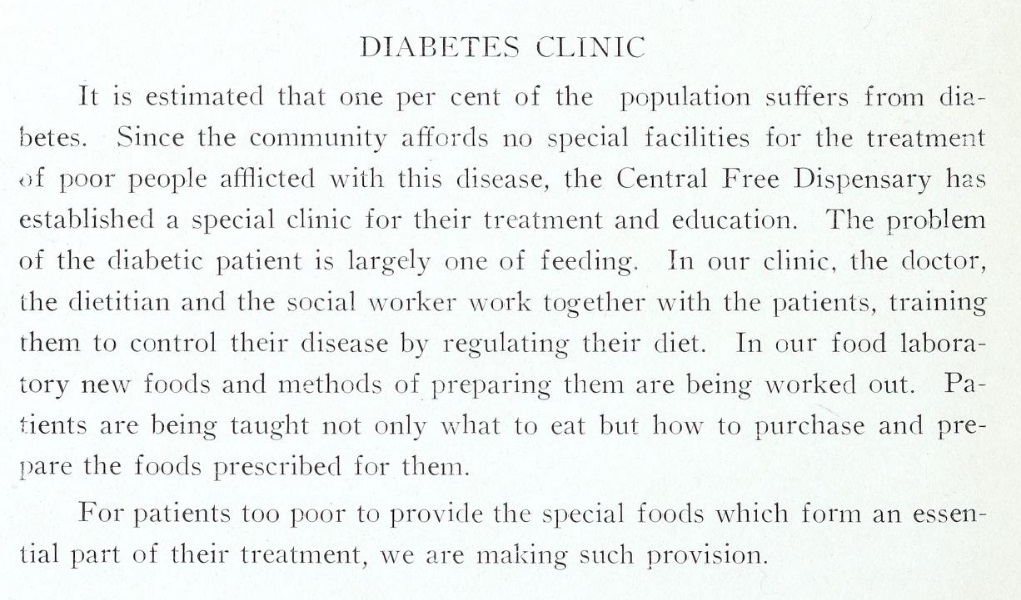 Before the introduction of insulin, the Central Free Dispensary at Rush Medical College opened the Diabetes Clinic to address the lack of specialized care for people with diabetes in Chicago. The clinic featured a multi-disciplinary team composed of a physician, a dietitian, and a social worker. These professionals worked together to identify an appropriate diet for the patient and teach them how to procure and prepare specific foods.

CAPTION: A description of the Dispensary's Diabetes Clinic. From The Forty-Second Report of the Central Free Dispensary at Rush Medical College, 1916-1919. [1]

This Diabetes Clinic was led by Rollin T. Woodyatt, MD (1878-1953). After earning his medical degree from Rush Medical College in 1902, Woodyatt served his internship at Rush's teaching hospital, Presbyterian Hospital. He soon became interested in diabetes research. After completing his internship, he joined the hospital staff as Assistant in Medicine, later serving as Attending Physician. He also served as Clinical Professor and Chairman of the Department of Medicine at Rush Medical College. 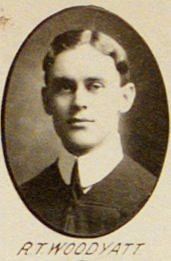 At the time of this 1916-1919 Report, the Central Free Dispensary noted that an estimated one percent of the population had diabetes. According to the American Diabetes Association, an estimated 10.5% of Americans had diabetes in 2018. With the increase in known cases, Rush University Medical Center continues to support the care and well-being of people with diabetes: www.rush.edu/conditions/diabetes

Before insulin became available commercially, Woodyatt was one of the early specialists asked to develop insulin after its discovery by Canadians Charles H. Best and Frederick G. Banting. He worked to perfect insulin for patient use and began to produce it in his laboratory, becoming one of the first providers of insulin for Chicago diabetes patients.

His expertise in metabolic disorders led to him serving as a witness in Chicago's well-known trial of Leopold and Loeb. This 1924 trial of Richard Loeb and Nathan F. Leopold, Jr., for the kidnapping and murder of fourteen-year-old Bobby Franks was daily news at the time. The defense held that Leopold and Loeb suffered from functional disorders of the endocrine glands, which affected their mentality. The defense was hoping this would lead to a lesser sentence for the two defendants.

A headline for August 15, 1924, for an article that covered Woodyatt's expert witness testimony in detail read:

Glands Have No Effect on Mind, Claim of State

Nothing in Findings Incompatible with Health, Says Defense.

"In scientific terms, [Woodyatt] described the various tests for determining the rate or degree of metabolism in a patient, referring to determining the amount of carbon dioxide in the blood, sugar in the system, acidosis, interspersing replies to hypothetical questions."

"Clarence S. Darrow, chief of defense counsel, and Robert E. Crowe, the state's attorney, spent the period of Dr. Woodyatt's technical testimony seated next to each other chatting and smiling in friendly fashion, apparently having forgotten their clash of yesterday." 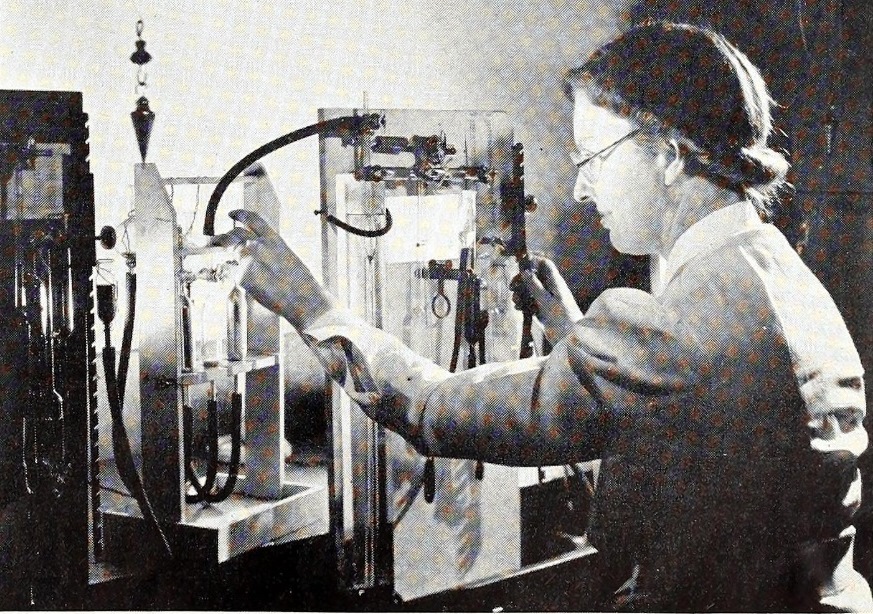 CAPTION: "Samples of expired air are collected, and a Haldane gas analysis is done to determine its content of carbon dioxide and oxygen. From these data is determined the number of calories a patient expends per square meter in 24 hours during completed bed rest while fasting. This information, and a comparison with the normal make it possible to calculate the Basal Metabolic Rate." Lab technician, Helen Smith. [2]

"...Since 1909, when it began, well over one hundred original papers on various phases of metabolism have been published by Dr. Woodyatt and his associates. The metabolic research done in the laboratory was the first of its kind in the Middle West..."

"...The service embraces internal medicine, with particular attention to disorders of the metabolism. It follows the principle that a clinic should carry on three lines of activity — practice, teaching, and research — and should train in all three phases..." 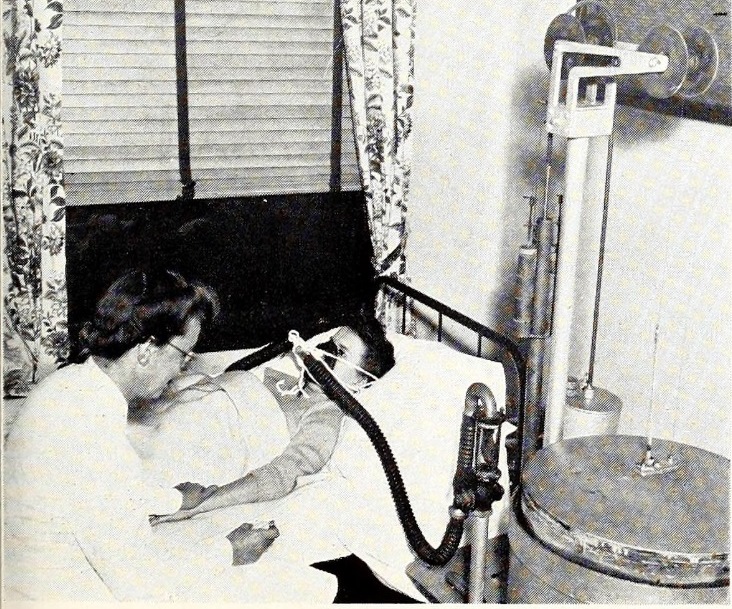 CAPTION: "The technician collects the patient's expired air by means of the Tissot apparatus as the first step in a basal metabolism test. The air is breathed for eight to ten minutes into the spirometer, a tank in which the volume of exhaled air is measured." Lab technician: Helen Smith.

A memorial to Rollin T. Woodyatt, MD, in The Bulletin of Presbyterian Hospital newsletter, Spring 1954, covers his life and career. [3]

Woodyatt, a lifelong bachelor, was a nephew of famed Chicago architect and planner, Daniel Burnham. He died at 75 in 1953.

Learn more about the history of diabetes treatment, including the introduction of insulin, from the American Diabetes Association: [link] [4]

A partial list of some of Woodyatt's articles regarding diabetes and related research over his career provides an overview of the development of diabetes research over those decades: 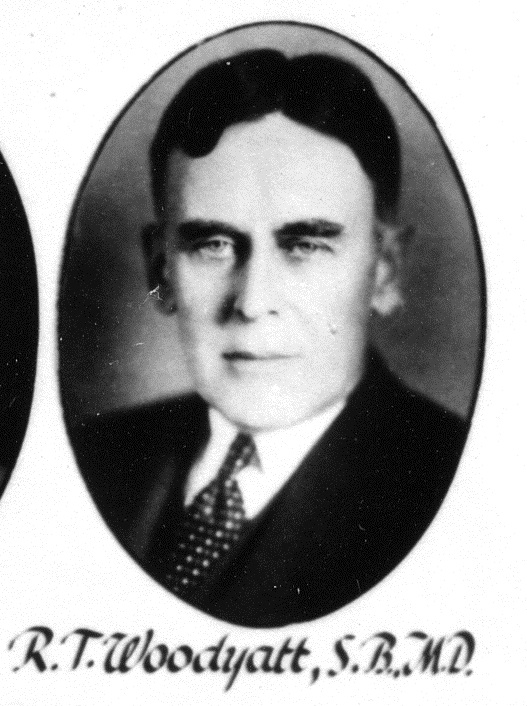 1910: "The Action of Glycol Aldehyd and Glycerin Aldehyd in Diabetes Mellitus and the Nature of Antiketogenesis," Journal of the American Medical Association, December 17, 1910, Vol. LV, pp. 2109-2112.

1913: "Studies on the Theory of Diabetes I: Sarcolactic Acid in Diabetic Muscle," Journal of Biological Chemistry, Vol. XIV, No. 5, June 1913.

1914: "Extra sugar during ether and nitrous oxide narcosis in fully phlorhizinized dogs: Sources of error in existing methods for the study of gluconeogenesis," Proceedings of the Society for Experimental Biology and Medicine, 1914, Vol. xi, p. 157-159.

1914: :Studies on the theory of diabetes II: Glycid and acetole in the normal and phlorhizinized animal," Journal of Biological Chemistry, vol. XVI, no. 4, January 1914.

1941: "On the Theory of Diabetes," Transactions of the American Clinical and Climatological Association, 1941.

CAPTION: Woodyatt as a Rush Medical College faculty member in the final class composite photograph of the school before its closure, 1942.