From the Rush Archives: David Jones Peck, MD (part 3 of 4)

--This blog post is the third of four pieces on the life and legacy of David Jones Peck, MD, Rush Medical College, class of 1847.

After earning his medical degree from Rush Medical College in 1847, David Jones Peck, MD, remained heavily involved in efforts toward the abolition of slavery and the advancement of Black Americans.

Peck toured the state of Ohio with renowned activists Frederick Douglass and William Lloyd Garrison. Newspapers known for reporting on Black American issues like The North Star, edited by Douglass and Peck’s longtime friend Dr. Martin Delany, kept up with Peck’s activities. Dr. Peck’s recent achievement and those of other Black Americans were considered inspirational and representative of the potential of all Black Americans.

Although Peck was a “gentleman of the utmost respectability,” with an “educated mind, refined manners” and a Graduate of Medicine, he continued to confront racism at every turn. One incident reprinted in The North Star in 1848, described how Peck was turned away from an auction sale of medical books in Philadelphia. He was told at the auction house “that persons of his complexion could not be permitted there.” Later, it’s mentioned that “the auctioneer was fearful—if he permitted Dr. Peck to be present—of giving offence to the Southern student, but the motive instead of mitigating, only aggravates the offence. Can sordidness and servility be any excuse for such ill-bred brutality!”

“Virtue is not designated by Colors”

Another documented moment that can be found in The North Star is a toast given by Dr. Peck, August 10, 1849. The event was the first First of August Celebration, which was held in Buffalo, NY. The First of August commemorates the emancipation of the British West Indies, August 1, 1834, a date that was inspiring to American activists working toward abolition and emancipation in the United States.

When it was Dr. Peck’s turn to give a toast, he rose and toasted to the following:

The American Eagle –
Its head and tail unsullied white;
its body resplendent black.
Virtue is not designated by Colors.

Although brief, this is one of the only examples of Dr. Peck’s own words, since most mentions of him referred to him but did not include his own statements or writing.

On the same page as Peck's toast is a mention of Elizabeth Blackwell’s mixed reception in Paris. Blackwell became the first woman to earn a medical degree from an American medical school, Geneva Medical College in New York, earlier that year. It's interesting to imagine what these two groundbreaking doctors might have thought of each other.

See below for more information on the Blackwell sisters and parallels to Dr. Peck's experiences.*

Progress is not linear

According to local resources uncovered by Michael J. Harris, PhD, former Rush faculty, for his 1996 article, "David Jones Peck, MD: A Dream Denied," [5] Peck returned to Chicago briefly in 1849 to marry a woman named Mary E. Lewis. However, not much else is known about her. It seems unlikely that Dr. Peck had children.

There was progress among some Black Americans in the 1840s, as more individuals broke barriers in different fields. However, this progress was considered threatening to some white Americans, who prepared a backlash against this advancement. 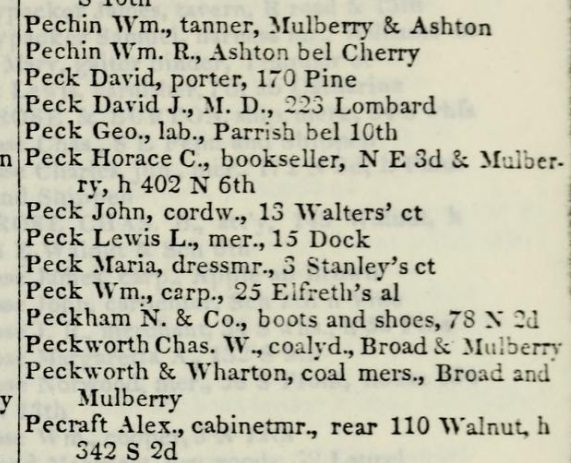 Individual states might have already had “Black Codes,” but many more were added, or enforced more strongly, in the late 1840s and 1850s. The Black Codes were a series of very specific laws regulating Black lives. These laws supported the rights of enslavers and took away rights of all Black Americans. They forbid the presence of Black individuals on juries or as witnesses against white people, forbid Black Americans from voting, limited the number of Black individuals who could gather together, among many other restrictions. With the passage of the Fugitive Slave Act of 1850, Black Americans, men, women, and children, could be kidnapped off the street and sold into slavery, with little to no recourse.

During this era of uncertainty and escalating terrorism, Peck practiced medicine in Philadelphia for approximately three years, until about 1852.

After practicing medicine for over fifteen years and remaining involved in activist causes, Peck’s friend Martin R. Delany was accepted as a student of Harvard Medical School, 1850. Delany had been invited by the dean and seemed to have the support of faculty. Delany was accepted along with two other Black men, Daniel Laing, Jr., and Isaac H. Snowden.

Some white medical students at Harvard complained about the presence of the Black students, however. Like at Rush Medical College, the white students were allowed to vote on whether Delany, Laing, and Snowden could continue. Unlike at Rush, the white students voted against the continued inclusion of Delany and the Black students, and the three men were expelled. Harvard Medical School would not have a Black graduate until after the Civil War, in 1869. (Coincidentally, both Laing and Snowden, who had emigrated to Liberia after their Harvard rejections, died in 1869. Laing, who had returned to the United States, was suspected to have been a victim of intentional poisoning in Charleston, SC.) 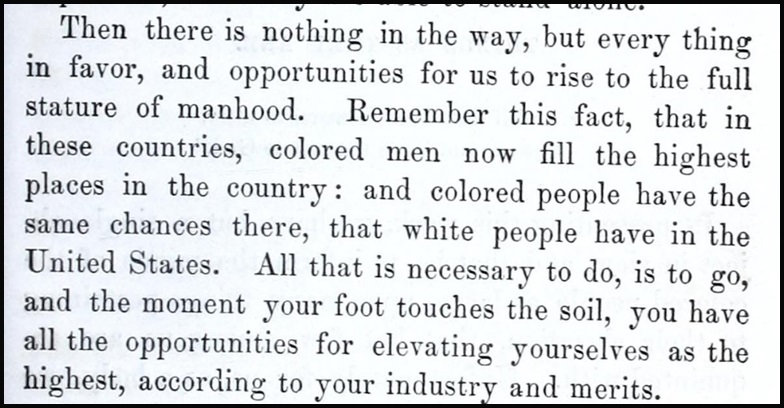 This insult to his intelligence and abilities, along with the Fugitive Slave Act of 1850, seemed to compel Delany to reassess the idea of emigration. He weighed the pros and cons of leaving the United States and emigrating to Liberia, South America, or Canada. In his compelling book from 1852, The Condition, Elevation, Emigration, and Destiny of the Colored People of the United States Politically Considered, Delany described Nicaragua as one of the best potential countries for Black Americans to start a new life.

CAPTION: From The Condition, Elevation, Emigration, and Destiny of the Colored People of the United States Politically Considered by Martin Robison Delany, 1852 [7]

It’s very likely Delany and Peck had discussed this as well, considering their close relationship. Seemingly disappointed in his own prospects in the United States, David Jones Peck joined other Black Americans in Nicaragua in 1852, hoping to find acceptance there that he would not find in his home country.

Even in Nicaragua, Peck found it impossible to escape the political maneuverings of those who not only wanted to preserve enslavement, but to expand it beyond American borders. Unfortunately, while Peck was building a new life in his new country, political factions in Nicaragua became embroiled in what would be called the Filibuster War, beginning in 1854.

CAPTION: From The Condition, Elevation, Emigration, and Destiny of the Colored People of the United States Politically Considered by Martin Robison Delany, 1852 [7]

In the decades preceding the Civil War, mercenaries, often United States citizens, led private armies into territories and countries like Texas, California, Mexico, and Nicaragua. Officially, these men, known as “filibusters,” worked in their own self-interest as they fomented insurrections and political in-fighting among local citizens. However, the filibusters often had the tacit approval of the United States government which could ultimately benefit from this instability and the exploitation of these countries’ resources. And politicians in American “slave-states” encouraged, and sometimes funded, these activities which would potentially increase territories amenable to enslavement and pro-slavery interests.

In Nicaragua, a young American named William Walker would cast a dark shadow. After unsuccessful attempts to conquer parts of Mexico, he set his sights on Nicaragua in 1855. With a reputation as a mercenary leader, the Conservative Party based in Granada sought Walker’s assistance in a civil war against the Liberal Party, based in Leon, where Peck was located. 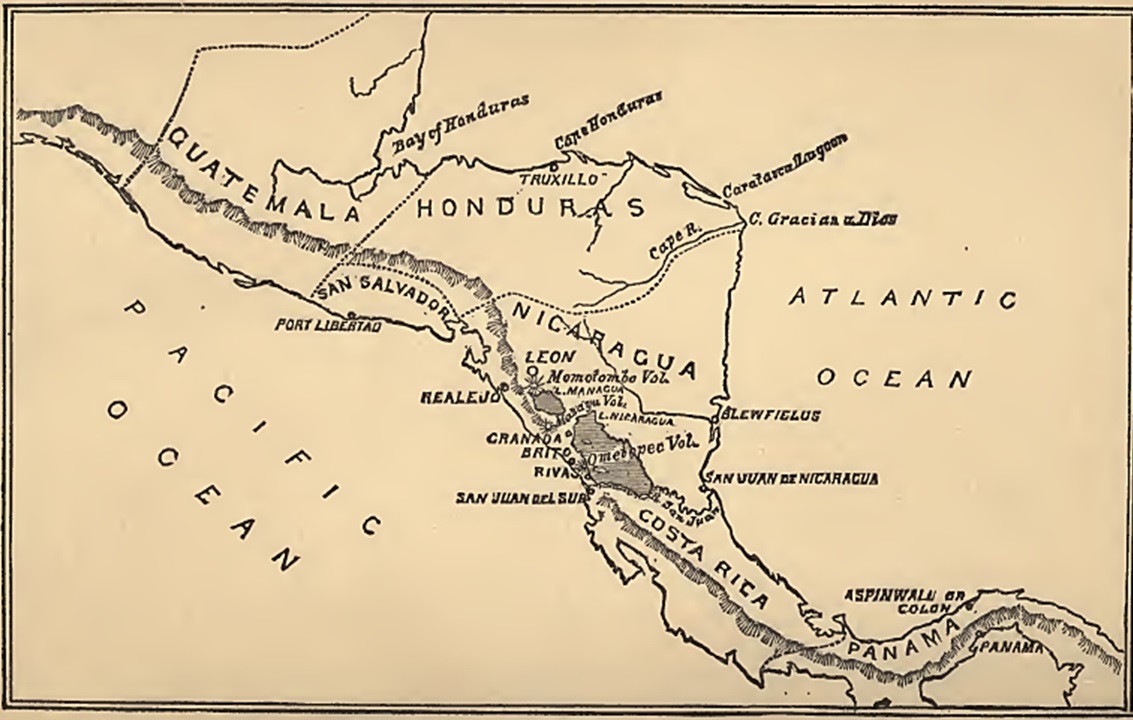 Nicaragua was gaining international attention due to its location as a potential site for an inter-oceanic route between the Atlantic and Pacific Oceans. (Panama would soon win out as a location for a canal, although it would take decades to open after years of political disagreements, negotiations and construction.) A Nicaraguan government with a close relationship to the United States would be beneficial for future dealings regarding a canal.

CAPTION: Map of Nicaragua from Reminiscences of the “Filibuster War” in Nicaragua, by C. W. Doubleday, 1886. [8]

We don’t know much about Dr. Peck’s time in Nicaragua. For many years, Peck scholars were unsure of his fate, although it was assumed he had never returned to the United States. Ten years ago, however, these researchers were able to establish that Dr. Peck had indeed died in Nicaragua and how he met his end. [More on these Peck scholars in Part 4.]

An obscure 1886 memoir by a man named Charles W. Doubleday was rediscovered, which finally brought closure to the story of David Jones Peck.

In Reminiscences of the 'Filibuster' War in Nicaragua, Doubleday, a witness to Dr. Peck’s death, describes Peck’s final moments before he was killed by a concussive blast from a cannonball in 1855, during a skirmish near Granada. Peck had been fighting for the Democratic, or Liberal, Party based in Leon. These pages of Doubleday’s memoir are the most we know about Peck’s experience in Nicaragua.

Dr. Harris aptly chose the title, “A Dream Denied,” for his 1996 biography of David Jones Peck. A young Black man was able to fulfill the dreams of many other Black Americans by earning a medical degree. But his dreams of practicing medicine in peace, witnessing the end of enslavement, and watching the rise of his fellow Black Americans were consistently denied him by racist systems and white supremacists, even in another country. He was likely only 29 years old when he died.

But Peck left behind countless friends, allies and family who continued the struggle long after he was gone.

Part 4: The Legacy of David Jones Peck, MD, will post soon. Subscribe to the Rush Archives Blog in the "SUBSCRIBE" box for notifications of new posts.

*Much can be said about Elizabeth and Emily Blackwell. In fact, a new book about them was just released, The Doctors Blackwell: How Two Pioneering Sisters Brought Medicine to Women--And Women to Medicine, by Janice Nimura. Two key aspects of their stories tie into Peck's:

A fateful vote: In 1847, when Elizabeth Blackwell applied to New York's Geneva Medical College, later called Hobart College, the school's leadership did not want the responsibility of allowing a woman to matriculate. Much like in Peck's case at Rush Medical College and Delany's experience at Harvard, the white, male students were given the opportunity to vote in order to determine this woman's fate. In Blackwell's case, the vote had to be unanimous. The students voted to allow Blackwell the chance to be the first woman graduate of an American medical school. This was the same year David Jones Peck earned his medical degree. She completed her courses and earned her medical degree in 1849.

A woman at Rush Medical College: However, Elizabeth's sister Emily was not accepted to the same school soon after. Determined to earn her own medical degree, Emily Blackwell applied to several schools, and was finally accepted by Rush Medical College in 1853. Supposedly, however, the Illinois State Medical Society berated Rush for allowing a woman to study medicine, and she was dismissed before she could complete the course. Rush Medical College didn't have woman graduates until 1903, fifty years later.