From the Rush Archives: David Jones Peck, MD (Part 1 of 4)

--This blog post is the first of four pieces on the life and legacy of David Jones Peck, MD, Rush Medical College, class of 1847.

For many Americans, the 1840s and 1850s might seem like ancient history. But the lessons of that era remain significant today. By understanding our history as a country and institution and learning about the individuals who helped get us here, we can find both inspiration and warnings.

When it comes to Dr. David Peck, this is typically the one-sentence fact people want to know:

But there is so much more to Dr. Peck than that one sentence. Peck’s journey touches on many other vital pieces of American history in part because of his broad network of both Black and white abolitionists and physicians. Additionally, becoming the first Black man to earn a medical degree from an American medical school was a carefully considered decision on Peck’s part – and his journey doesn’t end there.

I hope you will follow along with these four weekly blog posts as I take you deeper into his life.

If you want to jump right in and get a solid overview of Dr. Peck's journey, I recommend the following resources: 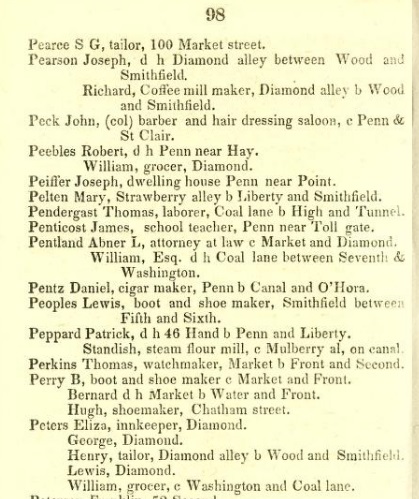 To understand more about Dr. Peck, it’s important to learn where he came from.

David Jones Peck was born free around 1826, and raised in Pittsburgh, Pennsylvania.

CAPTION: Listing for John Peck's barber and hair dressing saloon. The (col) by his name denoted that he was "colored." From Harris’ City Directory of Pittsburgh, 1839 [3]

Rev. Peck’s success as a businessman enabled him to provide a relatively comfortable life for his family and quality education for his children.

Rev. Peck was among the foremost supporters of the Underground Railroad network in Pittsburgh. He collaborated with other abolitionists and prominent Black individuals in his community, including fellow barbershop owner John Vashon and his son, George, and Martin Delany, a physician, helping fugitive enslaved people on their journeys.

“The Boys of Pittsburgh Against the World”

The earliest mention I have found of David Jones Peck is a letter that he wrote to a newspaper called The Colored American in 1839 as a young teenager. The newspaper's heading for this letter read, "The Boys of Pittsburgh Against the World."

In the letter, Peck introduces the Juvenile Anti-Slavery Society, and served as its president along with his childhood friend, George Vashon, as secretary. Peck notes that the group had raised money to support the newspaper and endorse its cause, shared with the Society.

The discovery of items like this help expand on Dr. Peck’s life story. It's evident that David and his friend George were inspired and encouraged to break barriers by their fathers and the men in their community.

Although Peck knew that earning a medical degree in the United States was challenging for white Americans, and seemingly impossible for even the most experienced Black doctors, he grew up knowing several physicians. 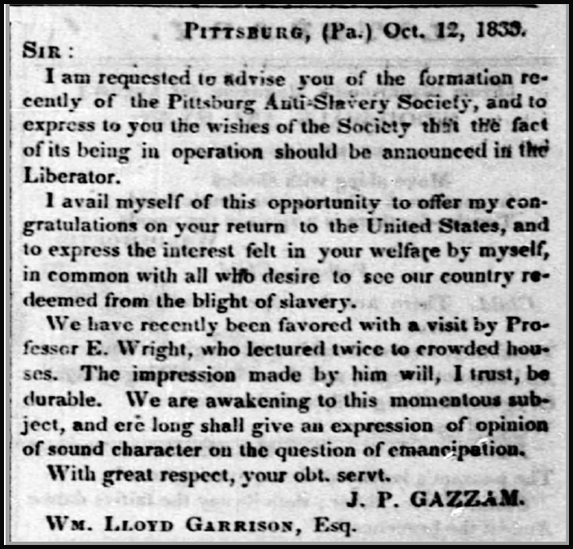 Joseph P. Gazzam was a well-known white physician and another prominent abolitionist in Pittsburgh who was known to train Black physicians.

During this time period in American history, most physicians did not attend medical school or have medical degrees. They learned on the job as apprentices under a preceptor, by assisting a practicing physician.

One of the Black men who apprenticed under Gazzam was Martin R. Delany. Delany established his own medical practice in Pittsburgh in 1836.

Dr. Delaney led an incredible, trailblazing life of his own, and I hope you will take some time to learn more about him. [He will reappear in Part 3.] 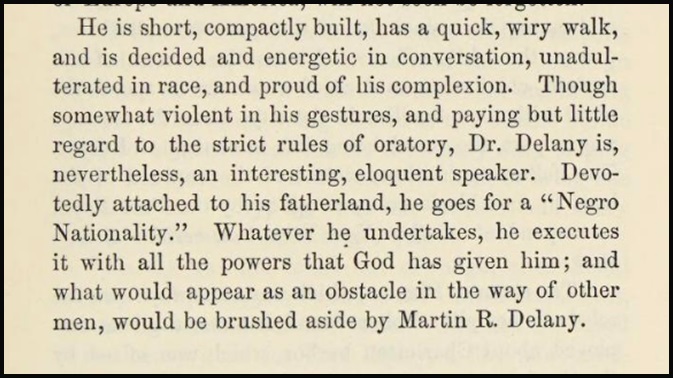 Perhaps not coincidentally, Dr. Smith, a close friend of Frederick Douglass, was the editor of The Colored American newspaper at the time the young David Jones Peck had written as president of the Juvenile Anti-Slavery Society!

It was also around this time, in 1835, that Oberlin College in Ohio became one of the first colleges in the United States to admit Black American students, and, in 1837, became the first to admit women.

Peck attended Oberlin College from about 1840 to about 1844. His friend George Vashon became the first Black graduate of Oberlin, 1844. Vashon has his own incredible story, as well, becoming one of the founding professors at Howard University and the first Black attorney admitted to the Bar in New York State.

After his time at Oberlin College, Peck returned to Pittsburgh. From about 1844 to 1846, Peck studied medicine under Dr. Joseph P. Gazzam, the white abolitionist physician who had previously trained Dr. Delany.

Delany, Vashon, and Peck were lifelong friends. Peck's strong support system of Black and white abolitionists and physicians in Pittsburgh, including these two, had ties to kindred spirits in Chicago which would eventually lead Peck to Rush Medical College.