This month, we reflect on the career and accomplishments of Rush’s George D. Wilbanks, Jr., MD (1931-2012). In 1970, Wilbanks was named the first full-time chairman of the department of obstetrics and gynecology at Rush-Presbyterian-St. Luke’s Medical Center (RPSLMC)*. Wilbanks succeeded Harry Boysen, MD, upon Boysen's retirement as chairman of the obstetrical and gynecological division of Presbyterian-St. Luke's Hospital. Wilbanks served as chairman until his retirement in 1996.

Wilbanks was named the first John M. Simpson Chair in Obstetrics and Gynecology, established in 1970, through the support of Simpson. Simpson's gift to Rush was prompted by his "high regard for Dr. Harry Boysen." [1] 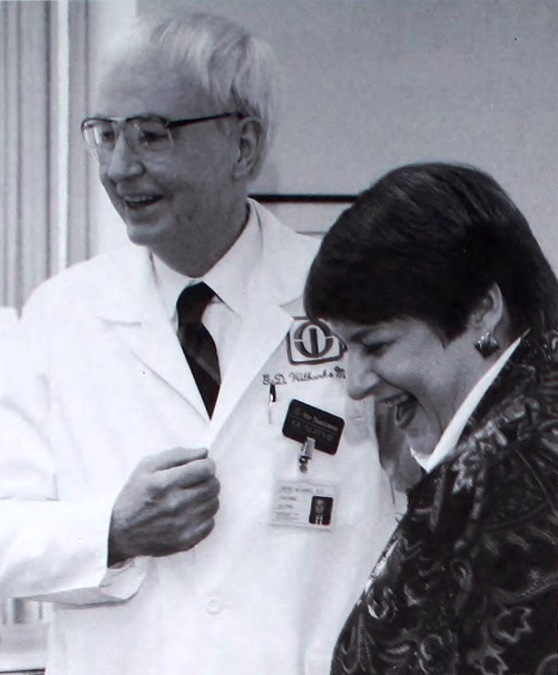 As chairman of obstetrics and gynecology at Rush, Wilbanks transformed a small program into one of the nation's top academic departments, boasting 60 faculty members, six fellows and 25 residents. He also established one of the nation's first urogynecology fellowships in 1988. In September 1996, he retired as chairman to pursue research into the causes and treatment of gynecologic cancers, specifically ovarian cancer.

In 1970, Wilbanks established the Rush Gynecologic Oncology Center, one of the first programs in the region to offer a multidisciplinary approach to the treatment of women with gynecologic cancers. He led this center until 1994, and continued to treat patients with gynecologic cancers as a member of the Rush Cancer Institute staff. Under his direction, the Rush Gynecologic Oncology Center was named a charter member of the National Cancer Institute's Gynecologic Oncology Group in 1970, a distinction that offered Rush patients access to promising new cancer treatments. During this time, Wilbanks also gained recognition for his own landmark laboratory research, including studies exploring the link between viral infection and cervical cancer.

Throughout his career, Wilbanks published more than 85 scientific journal and book articles and 15 book chapters on topics such as cervical, endometrial and ovarian cancer, sexually transmitted diseases, and important issues in the field of obstetrics and gynecology. Among his other accomplishments, Wilbanks helped establish a community-based Cancer Wellness Center in Northbrook in 1986. The center provided free psychological, emotional and social support for cancer patients and their families.

A leader on a local as well as national level, Wilbanks was the president of the American College of Obstetrics and Gynecologists from 1995 to 1996. He led ACOG in efforts to pass legislation at the state and federal levels, assuring two-day hospital stays for new mothers. He served as president of his specialty's two major educational organizations, the Association of Professors of Gynecology and Obstetrics (1991-1992), and the Council of University Chairs in Obstetrics and Gynecology, which he helped found. In addition, Wilbanks served as president of the International Federation of Cervical Pathology and Colposcopy (1987-1990), American Society of Colposcopy and Cervical Pathology (1975-1977), Association of Chicago Gynecologic Oncologists (1975-1977), and Chicago Gynecologic Society (1984-1985). He was vice president of the Society of Gynecologic Oncologists (1990-1991) and was a regent of the American College of Surgeons (1989-present).

The Rush-Presbyterian-St. Luke's Medical Center Chair in Gynecologic Oncology was established in 1996 to support research in ovarian cancer. The funding needed to endow the chair provided Wilbanks's many patients, colleagues and friends with a unique opportunity to honor a man widely respected for his compassionate care, innovative research and overall role as a leader in his field.

Learn more about Gynecologic Services at Rush today, including information on services and treatments related to Cervical Cancer and HPV: [link]

The Rush Archives holds the George D. Wilbanks, Jr., MD, Papers, (C96-067.) His personal papers span the length of Wilbanks's career, from his fellowship at Columbia University in the early 1960s, to his retirement in 1996 as chairman of obstetrics and gynecology at Rush. The bulk of his collection consists of his speeches and writings. To learn more about Wilbanks's career at Rush or his papers, please contact the Rush Archives.