Today, we conclude our look back at the women that worked and studied at Rush’s predecessor schools and hospitals one hundred years ago, at the time of the ratification of the Nineteenth Amendment of the United States Constitution. This 1920 Amendment declared in part, “The right of citizens of the United States to vote shall not be denied or abridged by the United States or by any State on account of sex.” 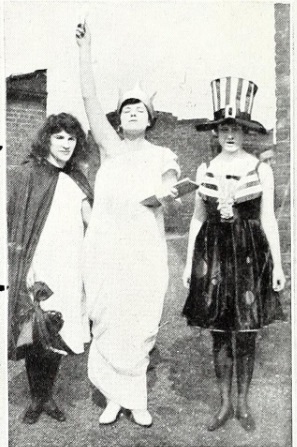 In 1920, St. Luke’s alumni were heavily involved in public health nursing and social services in Chicago. They kept statistics and produced studies and reports in an effort to support greater societal change.

The St. Luke’s Hospital School of Nursing Annual Announcement, 1920, includes some wonderful photographs of nursing students training and their facilities.

Occupational therapy was a fairly new profession in 1920, having gained prominence in the years following World War I. Occupational therapy grew from an increased need to rehabilitate wounded soldiers and veterans who sustained injuries and long-term disabilities during the war. 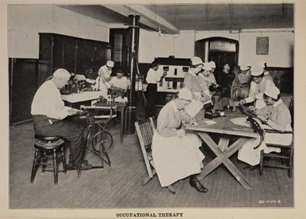 St. Luke's Hospital School of Nursing introduced a requirement of 16 hours of courses on occupational therapy after World War I. These courses included, "Lectures in  social aspects of disease. Lessons in basketry, weaving, carpentry, painting, stencilling, embroidery, etc. Talks on the therapeutic value of occupational work during convalescence."